The Australian Building Codes Board (“ABCB”) is a body established by the Council of Australian Governments (“COAG”) to address issues relating to safety, health, amenity and sustainability in the design and performance of buildings through the National Construction Code (“NCC”) (the Code).

In the 2014 edition of the NCC, the ABCB introduced a new Specification E4.8 to meet the Deemed-to-Satisfy Provision (“DtS”) of Part E4 of the Code.

Specification E4.8 sets out the requirements for photoluminescent exit signs in buildings.

The purpose of this article is to explain the characteristics of photoluminescent exit signs and the application in buildings as part of a Building Solution. Luminescence is the emission of light by a substance not resulting from heat; it is thus a form of cold body radiation. It can be caused by chemical reactions, electrical energy, subatomic motions, or stress on a crystal. This distinguishes luminescence from incandescence, which is light emitted by a substance as a result of heating.

Photoluminescence is characterised by the emission of light from a material after the absorption of photons (electromagnetic radiation).  Photoluminescence can be categorised as either fluorescence; or phosphorescence.

Fluorescence is the emission of light by a substance that has absorbed light or other electromagnetic radiation. It is a form of luminescence. In most cases, the emitted light has a longer wavelength, and therefore lower energy, than the absorbed radiation.
Phosphorescence is a specific type of photoluminescence related to fluorescence. Unlike fluorescence, a phosphorescent material does not immediately re-emit the radiation it absorbs. 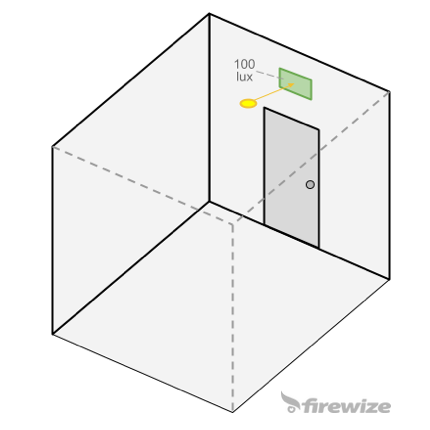 From the preceding definitions, we can determine that a photoluminescent exit signs are made from a type of phosphorescent material designed to emit light over a long period of time.  According to the Specification E4.8, in the event of a power failure, a photoluminescent exit sign must continue to provide a minimum of 30 mcd/m2 for a period of not less than 90 minutes.

Because these exit signs emit light after the absorption of photons. To help achieve this requirement, Specification E4.8 also sets out the requirement for a dedicated light source with a colour temperature of not less than 4000 K providing not less than 100 lux at the face of the exit sign as a source for these photons.