Mercury is a naturally occurring chemical element that can be found in air, water, and soil. Mercury has an atomic number 80 and symbol (Hg), and may also be referred to by a common name "quicksilver". Mercury has a melting point of -39°C and boiling point 356°C, and . Mercury may also be available in other forms or compounds such as dental amalgam.

As mercury is a liquid at room temperature that expands when it heats up, as such it has historically been used widely in measuring devices such as thermometers and barometers. Where uncontained at standard temperature and pressure, mercury evaporates slowly leading to exposure to people and the environment.Mercury is persistent in the environment, It accumulates in plants and animals, and throughout the food chain, particularly in fish and other aquatic life.

Mercury is a toxic heavy metal that is available in different forms within the environment and in use within society. In addition to mercury, lead, chromium, cadmium, and arsenic are the most common heavy metals. The inhalation of mercury vapour can produce harmful effects on the nervous, digestive and immune systems, lungs and kidneys, and may be fatal.

According to the World Health Organization1 most human exposure to mercury is caused by the accumulation of mercury in its vapour form from sources such as occupational exposure, dental amalgam and ingestion of contaminated fish.

According to Wikipedia mercury is used in thermometers, barometers, manometers, sphygmomanometers, float valves, mercury switches, mercury relays, fluorescent lamps, other devices. In addition mercury may also be found in other forms in products such as paint2 .

Other places where workers from the fire protection industry (or the public) may come in contact with heavy metals such as mercury at various locations including industrial processes, medical clinics and hospitals.

The inhalation of mercury vapour can produce harmful effects in humans and adversely affect the environment. In many workplaces where mercury forms part of an industrial process or in a hospital, it is very possible that trace amounts of toxic mercury contamination will be found.

Older hospitals in particular may pose a risk to workers who work in ceilings and and other areas that may have remained undisturbed for some time, and pose a risk from accumulated mercury residue.

Statutory obligations exist as set out in the Work Health and Safety Act (Cth) 2011 that require a person conducting a business or undertaking (PCBU) to maintain a Hazardous Chemicals Register. 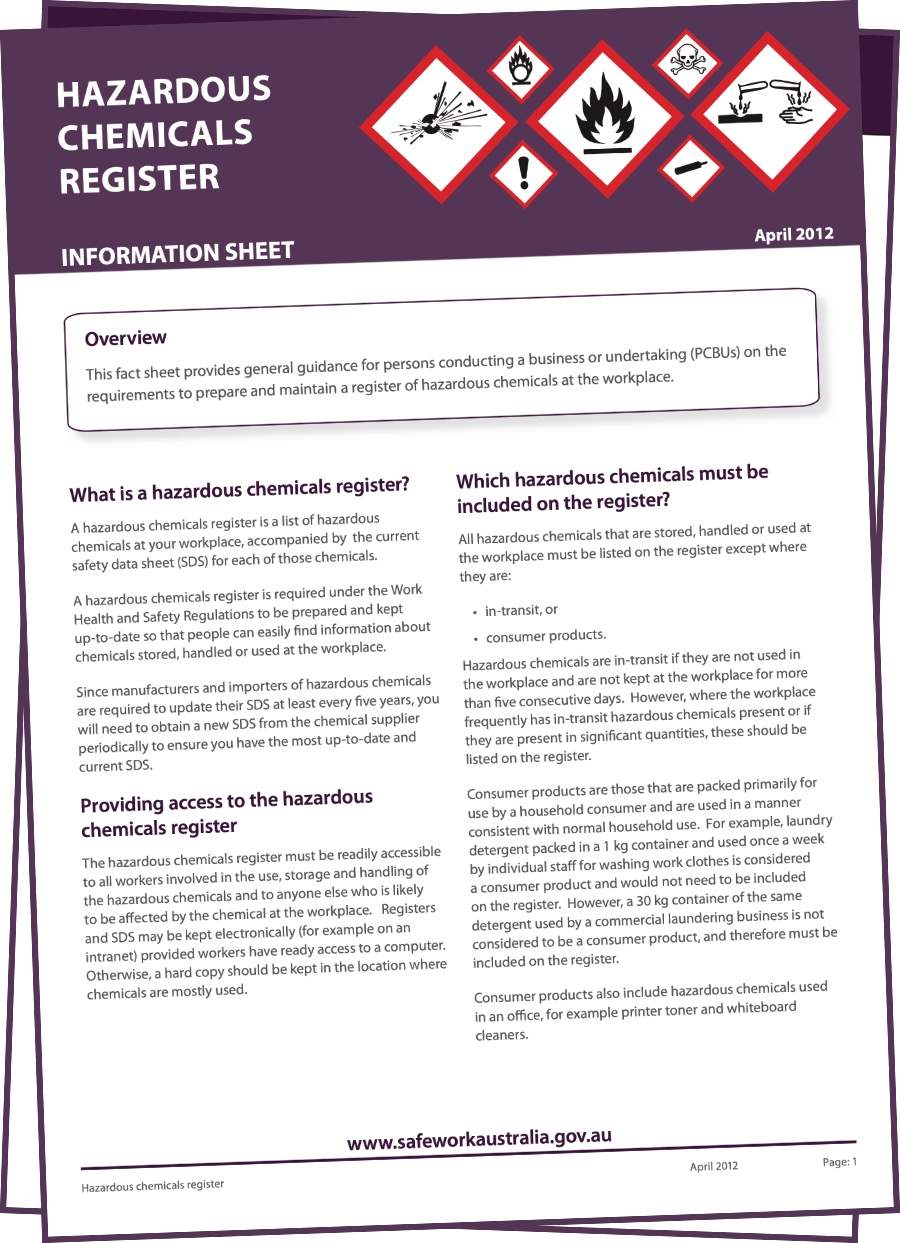 A hazardous chemical register and safety data sheet ("SDS") may be kept electronically (for example on an intranet) provided workers have ready access to a computer. Otherwise, a hard copy should be kept in the location where chemicals are mostly used.